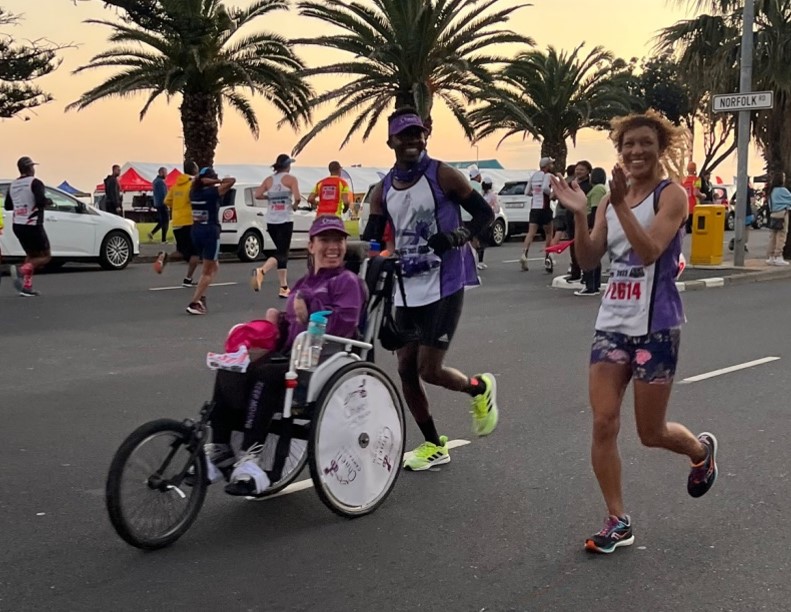 Mandela Day is a day sanctioned by the United Nations and is commemorated on the 18th of July each year on former President Nelson Mandela’s birthday to honour him by making a difference by inspiring change that creates a lasting impact.  Nelson Mandela once said “What counts in life is not the mere fact that we have lived. It is what difference we have made to the lives of others that will determine the significance of the life we lead”. Mandela embodied the essence of humility and forgiveness; something which we should all aspire to adopt and implement in our daily lives. Since its inception in 2009, people the world over have been encouraged to “make every day a Mandela Day”. Why wait for a day earmarked on a global calendar to make a difference in the lives of others? This is precisely the sentiment that is expressed by Pacific Mbela, a man who allowed a setback in his health to become his greatest comeback.

Pacific’s initial introduction to The Chaeli Campaign happened rather unconventionally. It was 2020: the world was in the midst of a global pandemic with restrictive regulations beyond his control, yet he had a burning desire to use his newfound passion for running to positively impact the lives of others. He reached out to The Chaeli Sports and Recreation Club coordinator, Debbie, on the recommendation of a colleague’s father who had prior involvement with the CSRC running club. What began as fun participation in monthly lockdown challenges soon evolved into training for actual races as lockdown regulations eased and things began to open up.

Although Pacific has always been interested in sports, he admitted that his interest in running came as a result of him needing to take action after a setback to his health. Pacific led a healthy lifestyle and there were no major indicators to suggest otherwise. So what led to this unexpected setback?  Fitting exercise into a demanding work schedule was complicated and the culmination of a demanding schedule and a lack of exercise resulted in stress manifesting physically.

It was December 2016 when Pacific started experiencing strange symptoms which often occurred on his left side, accompanied with frequent migraines. Assuming what he was experiencing was largely due to being overworked but not wanting to rule anything out he went to the hospital to have it checked out. When nothing was detected, he was advised to rest and take it easy.  Working at a coffee shop meant that his caffeine consumption was relatively high and realising that caffeine exasperated his symptoms he reduced his caffeine intake. This helped but didn’t alleviate his symptoms.

He vividly recalls the day he first began experiencing symptoms. It was February 2017, at work, when he suddenly started feeling dizzy and then fainted. When he came round he was shaking and his left side was paralysed. He had had a mini stroke. After being rushed to Victoria hospital and undergoing tests which came back inconclusive, it was decided that an MRI was the next course of action and he was referred to Groote Schuur Hospital for a scan. The problem was the earliest he could have the scan done was two months later in April. This was quickly escalated because just a month after the first incident, he fainted again. After being advised by his manager not to return to work, he was able to have the scan.

The results of the scan indicated that he had a brain tumour called a Meningioma. Pacific had to wait four months before he could have his operation and the build-up to the operation was filled with stress and speculation as he was unable to work and wondered if he would make it through such an extensive operation. In the midst of great uncertainty he held onto hope that God would always be with him. Despite overwhelming statistics that suggested that the odds of him making a complete recovery were very low, his renewed hope reminded him that God was bigger than his circumstance.

The op took place on July 5th 2017 and took 12 hours to complete. The operation was a success but he was prescribed heavy doses of medication as a precautionary measure to prevent the tumour from reoccurring. He put on 10kg as a result of the medication and became very depressed. He knew he had to make drastic changes to his lifestyle and decided to join a gym. However, it was peak season and the gym was always full. It was then that he decided to start running. Before he knew it the running bug had bitten but, more than that, it had become a source of healing for him.

He wanted to use this new lease on life to make a difference in the lives of others. It soon became apparent to some of Pacific’s customers who happened to be fellow runners that he had a natural ability that needed to be nurtured and it was under their guidance that he flourished. One of his customers gifted him with his first pair of proper running shoes. Pacific’s first fundraising initiative was in support of youth and transformation. After doing a few fundraisers he realised that he wanted to support an organisation whose objectives and purpose aligned with his. The Chaeli Campaign ticked all the boxes for him. 2022 had dawned and he was now a proud member of the Chaeli Sports and Recreation Club. Covid regulations easing meant that things had begun to open up, races had officially resumed and Pacific’s aim was to use the Two Oceans Ultra as his major fundraising initiative for The Chaeli Campaign. He had his sights set on doing a sub 5 Ultra; little did he know that a minor change in plan would lead to a beautiful outcome.

It was Wednesday, and the Two Oceans Ultra was just four days away. Chaeli had just received news that one of her regular running partners had to withdraw from the race due to a family emergency. Sometimes things come together in a way one least expects it to.

When Chaeli expressed her concern to Pacific during a donation handover at Seattle Coffee where The Trotters and Potters donated R16k towards Pacific’s fundraiser for The Chaeli Campaign, little did any of them realise the seed that had been planted. Just two days later, Pacific saw an appeal for a support runner put out by Chaeli on Facebook. It was then that he knew that he needed to step up to join the team. All it took was a phone call to and it was settled. What transpired was a beautiful depiction of grit, grace and inclusion. What Pacific lacked in experience he made up for with his strength, willpower and determination. Working in unison the formidable Team Beastie crossed the finish line of the 2022 Two Oceans Ultra in tears and jubilation as they realised they had achieved the Comrades qualifying time that they had hoped for.

For Pacific, this meant being part of something bigger then himself, sharing in the joy of assisting two people to achieve their goal and in the process he found his purpose. Pacific is a man with a heart of gold and exceptional talent. May his story encourage you to explore your unique talents and utilise them to make a difference in the lives of others.

Turning a setback into a comeback
Scroll to top