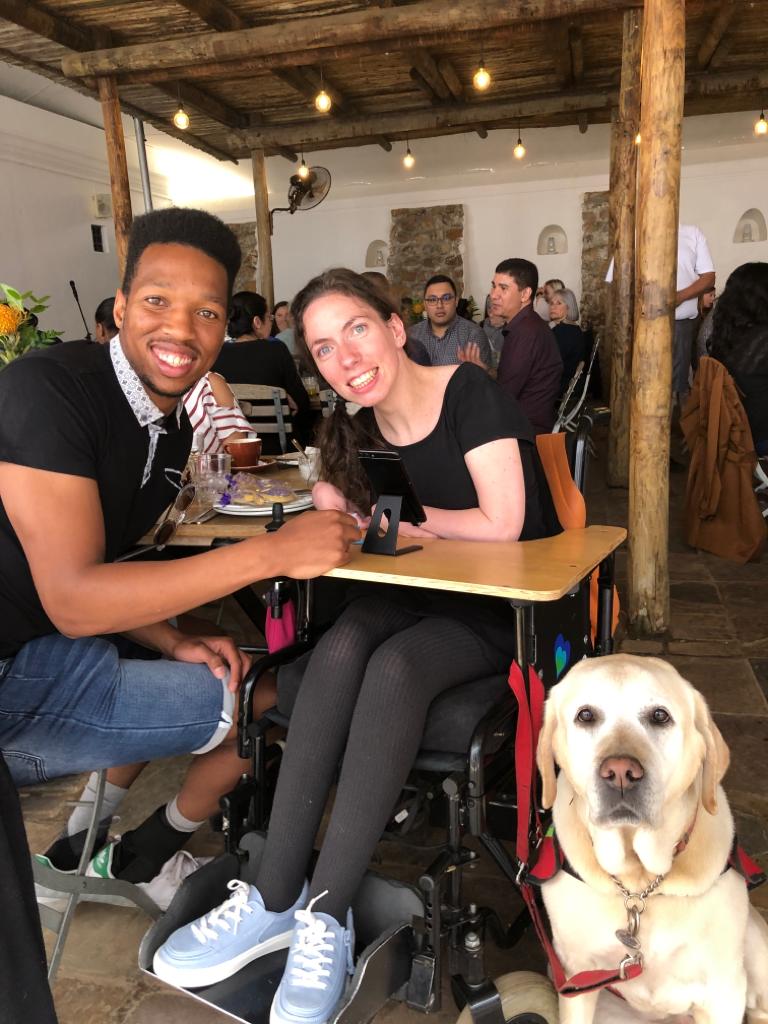 The Driving Ideology Behind an Ordinary World Champion

“Are you judged by people?” I ask Mpumi bluntly. “Possibly. Aren’t we all?”

The lens with which we view the world colours the perceptions of our experiences. These perceptions filter down to the very way we think about, speak to, and engage with, others. Perhaps, too often, we misconstrue the intention of another. Sometimes we make a judgement about someone based on a single belief or a specific trait they hold.

What if I told you that in reality, no one is judged: most of us are simply misunderstood. It may seem as if these responses stand on the same spectrum. On the contrary, these reactions indicate internalised ideologies about being human which may fundamentally be at odds with one another.

On 3 December, we celebrate Mpumi Mhlongo: an ordinary man with extraordinary drive. Mpumi holds three world records and is the first person in UCT history to have been awarded Sportsperson of the Year in five consecutive years. But, beyond his sporting achievements, it is his impressive mindset, collectivist thinking and unbiased spirit that makes him truly remarkable.

Mpumi meets with me to share some striking insights about community, embracing diversity and accepting who you are. Culminating his life philosophy, the perspectives shared are sure to inspire and, even more significantly, to influence yours.

Growing up in a KwaZulu Natal community of only 60 000 people, Mpumi Mhlongo spent his time after school playing in the streets until dark, with old friends and new. With no gates or boundary lines separating his house from his neighbours’, Mpumi listened for many hours to the wise elders around him conversing about life’s deepest questions. He was taught that all people are capable of love, adding value to the community, being purposeful and being happy.

Natural fitness was in Mpumi’s blood. And before long, the roads in which he played as a child became his stadium. His sports endeavours were varied as he received his provincial colours in swimming, cricket and soccer. But the sport which captured his heart, from a young age, was high jump. By 8 years old, Mpumi’s talent caught the attention of major newspapers around South Africa.

One day Mpumi was asked by a friend to join him in a 100m sprinting event. Always up for a challenge and willing to support his friend, Mpumi agreed to participate. At the race was a single-arm amputee, Vukile Skoti, who approached Mpumi after his run to congratulate him on his pace! Reverting back to his most common response, Mpumi answered that he has always been sporty and was happy to hear others considered him a fast runner.

“Do you also compete in para-competitions?” The amputee then asked curiously.

Mpumi was taken aback, as he knew nothing about parasport. Mpumi had not considered himself to have a disability. However, in spite of his self-assurance, Mpumi was, in fact, disabled.

Born with a club foot and amniotic band syndrome, Mpumi had always understood that he had a deformity. Restricting the bone growth of most of limbs, but significantly impacting his right leg, Mpumi’s condition left doctors giving his parents the devastating news that he would never walk. Preventatively wanting to preserve the rest of Mpumi’s leg via amputation, Mpumi’s mother outright refused. And miraculously, at the age of 6, only some months before he entered Grade 1, Mpumi took his first steps.

Mpumi lovingly describes the community in which he was raised as the place where his heart lies: where he got the most value. Nonetheless, growing up in a house governed by traditional African beliefs was not easy, given that ‘unexplained’ deformities are considered to be an ancestral curse or consequence of witchcraft.

It was only after Mpumi started becoming nationally recognised that the medical evidence around his impairment gained sufficient validity in the eyes of his great-grandmother. Explaining the context of her steadfast beliefs and later seeking Mpumi’s forgiveness, she came to accept and love him as “something special”.

Speaking with no resentment, Mpumi tells me that “Nature owes me nothing.” From very young, he was warned against the ‘slippery slope’ that is set in motion when you start laying out what you don’t have. Further voicing that “Inequalities exist everywhere in the world”, I start to wonder during our time together how Mpumi lives in such an optimistic space of possibility.

According to Mpumi, ‘disability’ means that the ‘Human spirit is being challenged and is being overcome’. He understands wholly that some may feel offended at being portrayed as ‘inspirational’ in the media, basically for having a disability. However, though he has enough empathy to understand that some people with disabilities may be uncomfortable when their stories are told with the aim to inspire others, Mpumi offers a different perspective.

Barack Obama or Bill Gates, for example, are just living their lives the best way they know how. But, we should applaud all worthy moments, as “It can take the same amount of fire or passion for a severely disabled person to stand up as it may take for Obama to mobilise a nation”. Creating more emphasis on the importance of disability representation in the media, Mpumi continues that parasport and the Paralympics, specifically, is at the height of the human spirit.

It emerges in our conversation that Mpumi’s fundamental source of meaning is derived from significance, rather than success. Society’s measure of how valuable you are speaks more to “what you’ve done to solidify your position in society”. Mpumi illustrates his point with the essential service of garbage collectors. Their contribution is neither seen as ‘successful’, nor an ‘achievement’, until a regional or national strike takes effect and nearly collapses an entire society. Only when the status quo is threatened do we acknowledge that certain jobs should be considered much more valuable than what they are. Teachers, Mpumi reckons, are the most undervalued profession in society.

Defining his self-worth beyond the need for success or independence, Mpumi strives for significance. This means actively contributing to more people than yourself, particularly your extended community. It’s vital that we don’t downplay our role in the lives of others, even when society may not value our achievements.

Mpumi’s mother, an ambitious woman who fostered his perspective, taught him to live in possibility. What this means to Mpumi is to unlock opportunities with the resources he has been given. What brings Mpumi joy, for example, is showing other kids that even with technical difficulties, that you can still achieve.

While living in his hometown in KZN, Mpumi was constantly surrounded by people. A diverse mix of kids, elders, acquaintances and passers-by – all living together. Importantly, Mpumi believes there is a false idea that those who share a common value, situation or locale, should see the world the same way. But, those who accept this notion are mistaken.

Mpumi wisely maintains that people will never completely agree, but “There’s something to love in everyone”. Relaying that he has never felt that others are a threat, Mpumi says that we should consciously affirm what we love about others. We do this, in part, through a two-way conversation of acquiring data about the values of another. Once we get enough information about the other person, we are able to put their shoes on and understand how they arrived at certain conclusions.

Seeking first to understand the other, Mpumi feels strongly that we can – and should – not dispute another person’s perspectives. “What we innately value is different”. And although we are each unique, our experience of shame and insecurity is not. It is normal to feel hate or embarrassment when others have a reaction towards us. “Humans have reactions”.

Speaking candidly about his childhood looking “weird” and how it feels to receive stares from strangers, Mpumi compares it to a person seeing something for the first time. If a child who has never grown up with pets sees a dog or a cat, then there is nothing more to accept, than to be around it and to become used to it. Saying that his own siblings used to run away from him when he was a child, Mpumi suggests that the unfamiliar “will become normal if you’re around it enough”.

“People may think you look strange and that’s fine! I might look funky in the process (of running), but it’ll be exciting.” We do not judge a flame, a cloud or a bird for looking as weird or as beautiful as it may look. Accordingly, Mpumi posits that “The real essence of influencing the way people see you is changing the way you see yourself”. This begins with accepting that we are all unique; and the only way to be open to others is to embrace – and learn from – people whose thinking and self-expression differs from your own.

By means of cross-cultural relating and togetherness, as Mpumi experienced in his community growing up, we enhance our appreciation and empathy for others. In this way, we do away with the fast dichotomies that tempt us to believe it is even possible to class and label humans so precisely. Mpumi leaves our conversation declaring that “Life is something to live for” and that we should always give more than we take. In this way, we can live in abundance: fully experiencing the endless opportunities life has to offer!

3 December is International Day of Disabled Persons; and the Chaeli Sports and Recreation Club (CSRC), founded in 2010, is honoured to celebrate Mpumi as its patron. Believing that the Chaeli Sports and Recreation Club represents what it means to be human, Mpumi strives to help find solutions and add value to others. Now, Mpumi will be walking alongside the CSRC to create opportunities for differently-abled kids to access – and participate in – sports.

Inspired by Mpumi’s resilience and passion for life, we stand behind him on his venture to the 2021 Tokyo Paralympics, the completion of his Chemical Engineering PhD at UCT and the success of his integrated healthcare start-up!

Guided by his own story, Mpumi’s 2020 mission is to spotlight the 80 million people in Africa who live with a physical and/or intellectual disability. Be #SomeoneWhoCares and support this incredible South African by signing up to his campaign, Mpumi2020.