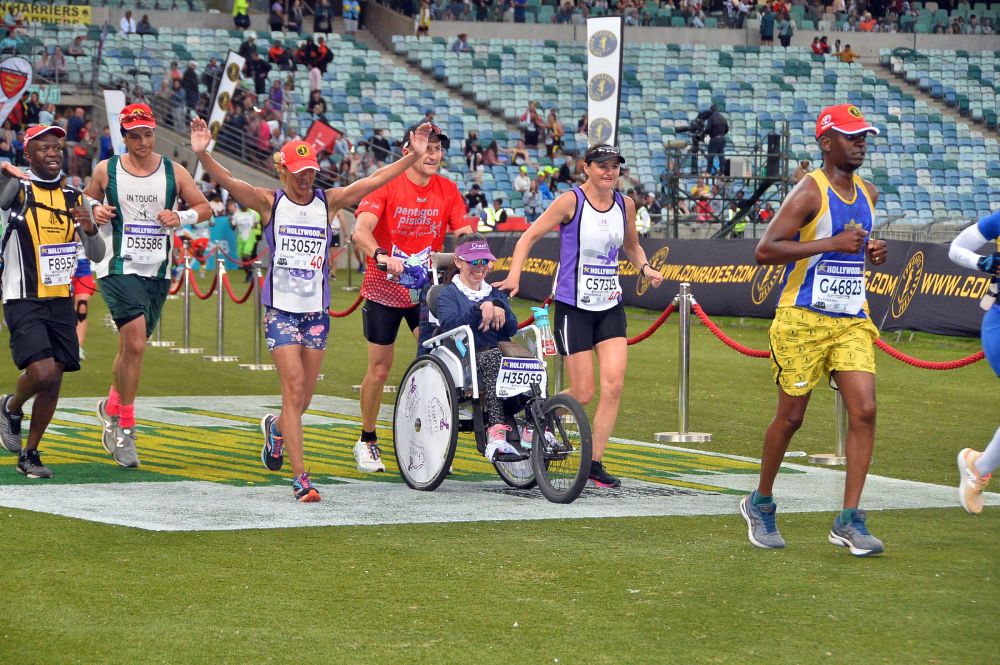 Chaeli is not afraid to challenge perceptions and go against the perceived norm; she is also no stranger to finding herself in the history books. In 2016, she became the first wheelchair athlete to finish the Comrades and six years later she, together with two other formidable women, Chantal Fisher and Daleen Cilliers, are joining forces to become the first all-female team to compete in the Comrades.

In commemoration of Women’s Month, I invite you to journey into the lives of three remarkable women, each with their own unique stories of why they started running and what led them to this point.

Chaeli Mycroft is not afraid to step out of her comfort zone and take on challenges which many people think is beyond her reach. She was introduced to running in 2015 and what started off as a 10km run quickly escalated to endurance events. She relishes that the longer runs challenge her mentally as well as physically. Her positive attitude and strong mind-set help tremendously when it comes to navigating life’s challenges and tackling the various endurance events she’s participated in. Many people have a misconception when it comes to Chaeli’s physical participation in these races – they wrongfully assume that because she’s assisted her body isn’t working. In reality, it takes a tremendous amount of effort to maintain balance and posture for long periods of time, ensuring that she harnesses all her ability to work with her pilot runner. By constantly shifting her body
weight and position in the jogger (custom-made running chair) up hill and down dale she assists her pilot runner by being an active running partner as opposed to being a passive ‘spectator’. Despite her many physical challenges, Chaeli has not let this prevent her from living life to the full.

When it comes to certain sporting events such as cycling and running, Chaeli relies on the assistance and support of some phenomenal humans. One such person is Chantal Fisher.

Chantal started running in 2015 and it very quickly became one of her biggest passions. Another passion of hers is volunteer work, so in 2018 having racked up a couple of races she jumped at the opportunity to turn her first Two Oceans Ultra into a charity fundraising run for The Chaeli Campaign. What solidified this decision was that when she was introduced to The Chaeli Campaign earlier that year she was amazed by the wonderful work they do, embodying the spirit of giving whilst emphasising the importance of inclusion. The culmination of both these special events that year was the beginning of beautiful things to come.

In January 2019 she made the Chaeli Sports and Recreation Club her official running club. This decision was a no-brainer for her and she embraced her new purple and white club colours with pride. That same year she was asked to serve on the Board, which she gladly accepted. This was also the year that would see her transition from being a solo runner to joining Chaeli and Team Beastie as co-pilot and eventually as a pilot runner.

Her first taste at being an assistant runner was the Peninsula Marathon in February 2019, a race filled with many memorable moments. Most notably at one point in the race they were challenged to take on the next few kms with a flat wheel. Two months later they tackled the OMTOM 56km. During this Ultra Marathon Team Beastie encountered challenges from the start as Bruce’s (Chaeli’s running jogger) wheel broke just a few metres from the start. Despite this mishap Team Beastie finished the race thanks to some sturdy cable ties and Chaeli’s wise words “it’s all ok” that served as a constant reminder to keep calm and collected. Chantal reflects that Chaeli’s positive attitude that day served as a reminder that with the right mind-set anything is possible.

June 2019: Chantal’s first ever Comrades Marathon. Feeling confident as part of Team Beastie she boldly and bravely took to the streets of Durban. She recounts the love and acknowledgement shown towards Team Beastie by fellow runners and supporters. These were beautiful moments she’ll forever cherish. Sadly, despite many months of preparation and training, they narrowly missed the halfway cut-off and their race ended at Drummond. This left them feeling deflated but not defeated and they left eager to come back stronger and more determined than ever.

July 2019 saw Chantal take on the Cape Town Festival of running half marathon, her first time as Team Beastie pilot runner. It was during this race where she had to “dig deep” and in many ways this was the start of her finding the confidence to be seen and heard out on the road. And then … Covid 2020: And Team Beastie was forced to put training plans on hold and take time to recalibrate.

For Ultra Marathons Team Beastie usually requires two runners in addition to Chaeli: a pilot runner and assistant for back-up support at water tables, etc. Chaeli has frequently reached out to new runners to experience the running adventure with her and Comrades 2022 was again such an opportunity. Enter Daleen Cilliers.

Daleen’s initial introduction to The Chaeli Campaign was in 2017 when her husband Ebarnie joined Chaeli for the Comrades as Team Beastie pilot runner. She ran the Comrades herself that year and recalls how that particular Comrades was a very emotional race. Being able to share in Ebarnie and Chaeli’s jubilation as they crossed the finish line, with Chaeli getting her back-to-back medal, was a moment she’ll never forget. Meeting Chaeli has given her a greater appreciation for adaptive athletes and the importance of inclusion.

Daleen ran her first Comrades at the age of 30 and now, 13 years later, she has run her 9th. Only this time she ran alongside Chaeli and Chantal to make history as the first all-girls adaptive team to enter the Comrades.

Daleen is an incredibly strong-willed woman of faith who maintains that one’s body is capable of a lot. It is with this positive stance that she has been able to complete many endurance events. These races include “Run for Hope” a 250km race which she’s done 3 times. She’s run 403 times around an athletics track totalling 160kms and she’s done a gruelling 60 hour race called “The Hour” which involves running and cycling as many laps as you can in 60 hours with very little rest. She won this proving to be worthy of the title “last woman standing”.

Daleen is fiercely determined and always tries her best to finish what she sets out to do, no matter how hard it is. “Quitting isn’t in my vocabulary”. She believes that running is about relaxation but what makes it enjoyable is when she is able to utilise the sport she loves to give back. It is with nervousness and excitement that she headed into this year’s Comrades.

Any words of encouragement for fellow Comrades?

Daleen “Just believe in yourself. You can do it!”

Chantal “Do what you’re passionate about, if it’s running, keep on running. When things get tough, don’t give up. Never feel sorry for yourself. When you fail, get back up, hang in there, keep moving and keep training. You’ll find that something great is waiting just around the corner. Don’t limit yourself, face your fears and embrace change because at the end of the day change is inevitable”.

Chaeli “Feel all your feelings. The race is an incredible experience of ups and downs, and it is a transformative experience for sure.”

Three powerful women. May each of their stories encourage you never to give up when the going gets tough as you endeavour to pursue your own dreams.

PS: Team Beastie was joined at the 17km mark by Gerhard Beukes from Bloemfontein – in the true spirit of Comrades collaboration – and crossed the finish line together in 11:10:57