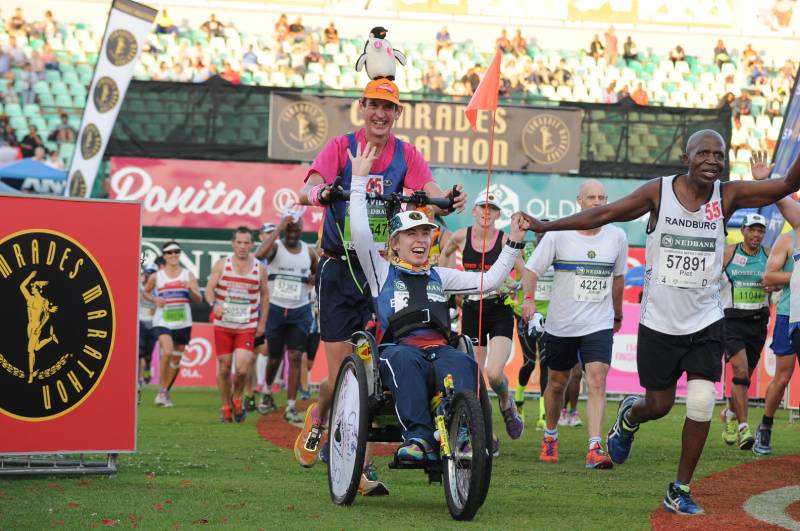 A special entry into the sporting world: creating a legacy of an inclusive Comrades

Known as the Ultimate Human Race, the gruelling Comrades Marathon has taken place every year since 1921, taking its only break during World War 2. Now, as the Covid-19 pandemic causes disruption of the in-person race for the second year in a row, The Chaeli Campaign acknowledges an athlete that is deserving of public attention: Anita Engelbrecht.

More than 300 000 people have completed the race, but there is something unique about two that did so in 2016. Along with Chaeli Mycroft, Anita Engelbrecht became the one of the first wheelchair athletes to participate in – and complete the arduous 89km race. An exclusive interview with Anita reveals the strong character behind this self-proclaimed adventure junkie.

Anita was born with cerebral palsy – miraculously surviving birth at an astounding 3 months premature! Undergoing 5 eye operations by the time she was just 4 years old, Anita explained that an optic nerve was injured during one of the procedures. In addition to using a wheelchair to get around, she reports only being able to see out of one eye at a time. Quirky Anita confirms this by saying “You can’t believe everything in the media, but that is true!” And, unbelievably, her brain usually grants vision to the eye closest to the object she is focusing on.

Anita is incredibly resilient: grounded in her identity and faith. Nevertheless, she talks about a time in her life where difficult decisions had to be made around her schooling, particularly after undergoing major hip surgeries. She can remember deliberating between what she was going to let define her and what she would not. From as young as 10 years old, Anita made it known that she would not let her disability dictate what she could achieve in her life.

Now at 28 years old, Anita has received her BCom in Management Accounting from Stellenbosch University, as well as an Honours degree through UNISA. Today, she is loving every moment of her career at Santam! She is grateful for being part of a team that values diversity and encourages each
person to play to their strengths. “My team embraces the entire Anita, not just bits and pieces”. There is recognition that each person brings something different to the table, which is precisely the motivation for inclusion in the workplace, schools, communities and even family units.

As much as she loves her job, she “appreciates the fact that one can’t work 24/7. That’s why having hobbies is so important for your health – not just physically, but mentally and emotionally as well!” Most young people are engaged in sport as their fundamental hobby. Nevertheless, being a wheelchair user, Anita can attest to the dire need for sports among disabled people.

Anita belongs to a sport-crazy family, designated to the position of ‘team manager’! Though her parents and brother are all avid cyclists and runners, sport was always something that Anita supported from the finish lines. This all changed once day when Anita received a call that would quite literally change her life. It was from a family friend, Hilton Murray, who had known Anita since she was 5 years old. Hilton’s colleague knew about an unused running jogger that needed a good home and thought he might be able to assist. Fortunately, he knew one person who was a perfect fit.

“Are you up for an adventure?” Hilton asked. Led by a pilot runner, this jogger equips a wheelchair user to participate and compete in road races. A hard “yes” was the answer. However, Anita exclaims that she doesn’t know if Hilton was aware of what was coming for him! Their first event together, the Moore Stephens night race, marked the beginning of a running partnership between Hilton and Anita that was beyond her expectations. Anita reveals that she has never experienced such determination and passion in anyone before racing with Hilton.

But while non-disabled entrants can simply apply to enter races online, barriers to entry are far greater for wheelchair-users like Anita. Promoting the concept for Anita and Hilton to “Run as One”, the pair was continuously confronted by regulations, restrictive policies and safety concerns that stood before them each time they wanted to enter.

Due to a fateful encounter between the mothers of Anita and Chaeli Mycroft, Anita found out about the spectrum of work done by The Chaeli Campaign. Though Anita had known about Chaeli for some years, it was only through this formal introduction that Anita learned about the Chaeli Sports and Recreation Club (CSRC).

The primary aim of the CSRC is to promote sports as a vehicle through which differently-abled people can embrace a full and active life. With inclusion at its core functioning, the success of sports programmes rely on partnerships between disabled and non-disabled athletes. The lack of sports access for disabled South Africans has been an urgent concern for decades. Through a revolutionary, inclusive vision of sports, Anita is now able to to participate in sports adventures. “I have never been able to participate before I joined, but the CSRC has enabled me to do what my parents have done before me,” she says.

Participating in the Cape Town Cycle Tour and running marathons around Cape Town for a couple of years, there was a strong drive for more. In 2016, Anita and Hilton would face their biggest obstacle to date: being allowed to compete in the Comrades Ultra Marathon.

With the full support and endorsement of The Chaeli Campaign and the CSRC, it was decided that the fight for equal opportunity to participate was non-negotiable. Constitutionally, it was argued that Anita was within her rights to participate as an adaptive runner, being granted the same access to enter the race as her fellow non-disabled athletes were given. The cause was driven to promote a truly inclusive #Comrades4All.

After months of paperwork, legal intervention and ongoing discussions, the decision to compete was granted by officials. Team Blitsie (Anita and Hilton), along with Team Beastie (Chaeli Mycroft and her pilots, James and Brett), made history by competing – and completing – the world’s largest and oldest ultra marathon.
Anita admits that there are bridges to build and cross in the running community. And this was felt after the Comrades 2016 was completed, with various voices expressing their dissatisfaction at the decision. Accepting assisted wheelchair users as athletes within their own right did not sit well with people whose idea of “competing” remains restricted to people who are self-propelled.

The inclusion of differently-abled athletes in races across the country, Anita affirms, doesn’t come at the price of another runner’s win. But it is only by embracing people who “don’t fit in the box”, as she puts it, that the potential for sports to transform wellbeing, life satisfaction, fitness and community can be fully accessed. To this end, we are far from evolving a more mature understanding of sports’ true purpose…

The CSRC stands with Anita in believing that the perceptions of disability need to be changed in our society. As someone who doesn’t proclaim the activist role very often, Anita wants to break the stigma and be part of influencing the way other people think about disability. “If you don’t have exposure to someone different to you, how wouldn’t it be daunting? But if we’re not talking about it, we’re breeding ignorance.”

Bearing some responsibility to be a voice for people who are vulnerable and mistreated in society, Anita believes that people are scared to talk about disability. “It’s easier to make as if we (disabled people) don’t exist than to actually tackle the topic.” But Anita is motivated by fear: she understands that although there are many challenges on our path, admittedly, none of these are made easier when we choose to avoid them.

While the impact that disability has on each person’s life is different, Anita says simply that there is always a story behind the story. What is ignored by society – the public at large – are the details behind the obstacles disabled people face every day. To listen deeper and to understand these challenges would offer renewed perspectives. Insights into the needs and rights of people with disabilities can then shape conversations, challenge harmful beliefs and behaviour, influence policy, and ultimately, redefine the perceptions of what is possible.

Anita says “I must do the hard work and fight, but it’s not necessarily for me – it’s for the people who come after me to have it easier. It’s been tough, but I know it’s not in vain.” The vision of inclusion is unfolding, but it is only made possible by moving out of one’s fear to tackle daunting conversations.

Since 2004, The Chaeli Campaign – along with friends, volunteers, and supporters – has been confronting attitudes and actions that harm disabled people in South Africa. Using a rights-focused lens to tackle social injustice, the NPO based in Cape Town has organically developed its programmes to support the real needs of disabled children and their families.

Let us stand against the pervasive prejudice and discrimination threatening those among us who are marginalised in our society, and let’s continue to move the boundaries of what is possible – together. Contact The Chaeli Campaign or the CSRC if you’d like to know more about our work, whether you need support or want to join our mission.

Anita Engelbrecht and inclusion in the Comrades
Scroll to top